Menu
Ask for a demonstration

Ask for a demonstration
Menu

In France, one in 32 births was due to a medically assisted reproduction procedure in 2015. Research continues to promote the implantation of embryos and increase the chances of a successful pregnancy. The most commonly used technique, in vitro fertilization, requires an ovarian puncture phase. This is an essential, yet invasive, step that psychologically upsets patients, especially since the success of the procedure is not guaranteed. What if there was a solution to reduce the stress related to the operation? In this article, we explain why virtual reality facilitates the egg retrieval process.

Ovarian puncture: what is it?

Follicular puncture consists of extracting the eggs, also called oocytes, produced during the ovulation period. It is a step that takes place in assisted reproduction protocols such as:

The process that accompanies medically assisted procreation (MAP) is not limited to egg retrieval. In fact, the procedure generally involves four steps:

Ovarian puncture is a short outpatient procedure and does not require hospitalization. Nevertheless, this operation generates stress, fears and sometimes nervous breakdowns. Intimacy and daily life revolve around this project whose success depends on many factors.

In order to obtain a sufficient number of eggs at the time of the puncture, the patient undergoes an ovarian stimulation process for a period of 10 to 20 days. This stage is carried out through hormonal injections and according to a treatment plan adapted to her ovarian capacity. With these methods, one to three follicles will develop. This growth is monitored by the medical team through regular ultrasound and blood tests. When the follicles reach a sufficient size (16 to 20 mm in diameter), the puncture procedure can be scheduled.

The process of assisted reproduction is long and intense. The emotional and social factor plays a role in the well-being of the couple in general. Feeling accompanied and supported, especially during the waiting period, provides relief and reassurance. Although studies show that stress does not have a decisive influence on the success of IVF, it does have an impact on the daily life of the future parents. The adrenaline released during these anxiety phases sends an alert message to the body and therefore does not invite the relaxation necessary for this preoperative preparation.

A postoperative recovery phase not to be neglected

The duration of recovery varies according to the patient. Nevertheless, this is not a period to be trivialized. The usual recommendations suggest a rest period of at least one day, during which no intense effort should be made. This last stage of the procedure does not mean the end of the road.

The chances of a successful pregnancy vary from 10% to 22% per attempt on average, according to the medical and scientific report on medically assisted procreation and human genetics in France produced by the Biomedicine Agency in 2016. Anxiety occurs both before and after egg retrieval. It is essential to find non-medicinal methods to durably treat these agitations.

What if virtual reality hypnosis helped you get pregnant?

Hypnosis and MAP: a powerful duo

Medical hypnosis improves the management of pathologies thanks to its non-pharmacological analgesic and anxiolytic approach. Its palliative, not curative, effect reduces anxiety disorders, relieves chronic pain and reduces harmful and addictive behaviors. If its positive action to reduce stress is well known, it’s not the case of its ability to improve the chances of a successful pregnancy.

However, several clinical studies have shown that hypnosis sessions promote the success of the IVF procedure and relaxation. One experiment, conducted by an Israeli team from the Soroka Medical Center and published in 2006, is particularly telling. Indeed, the rate of embryo implantation increased from 14.4 to 28%, while the pregnancy rate per patient grew from 30.2 to 58.4%. These results leave little doubt about the effectiveness of hypnotherapy in MAP procedures. Among alternative medicine techniques, hypnosis is the most convincing. 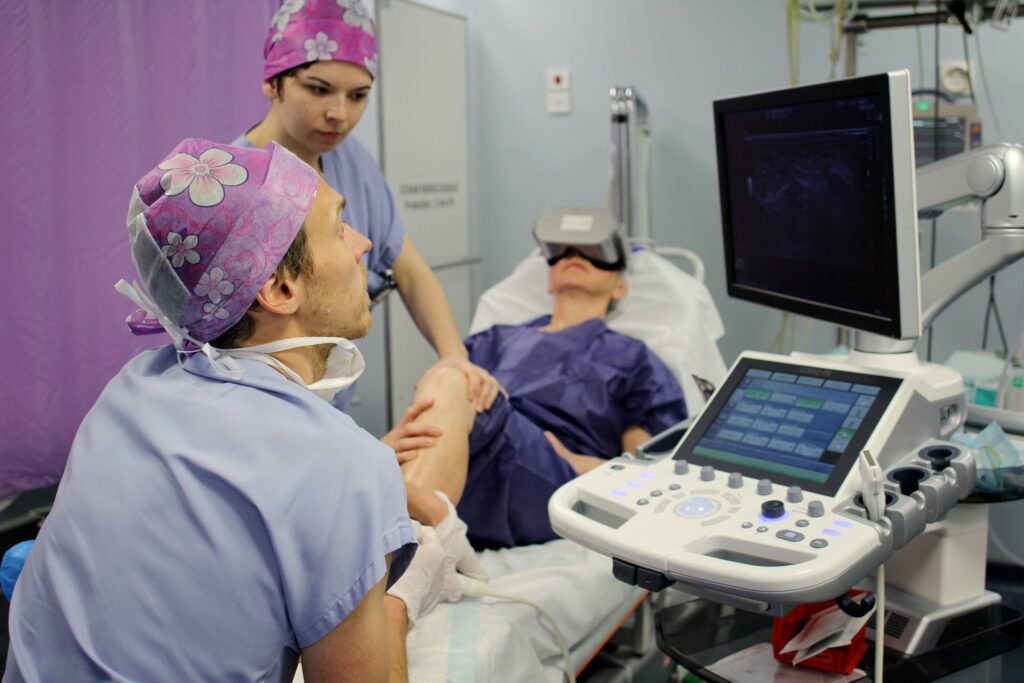 Virtual reality (VR) represents a major innovation in the medical field. Simulation in realistic 3D environments immerses the patient in a modified state of consciousness. However, VR is not just a distraction that diverts attention. By combining it with relaxing principles, including hypnosis, virtual reality provides a real response to the treatment of anxiety.

To go even further, our team has gathered the expertise of hypnotherapists, sophrologists and doctors specialized in neuroscience to create an innovative solution. Healthy Mind’s virtual reality headsets combine :

A study conducted at the Saint-Luc clinics in Brussels focused on reducing anxiety and pain during an ovarian puncture. During this procedure, patients were offered 20-minute virtual reality sessions in addition to the administration of a mild sedative. At the end of this experiment, 89% of the participants considered that the use of the VR headset provided additional well-being.

During an ovarian puncture, the patient must be in good conditions to increase the chances of success. Thanks to virtual reality and its relaxing principles, the operation is experienced more comfortably. Several hospitals have already adopted our medical solution to facilitate the egg retrieval process. If you would like to learn more, we invite you to contact us and request a demonstration of our product.