Menu
ASk for a demonstration

ask for a demonstration
Menu

Side effects of virtual reality (VR): should you be worried? 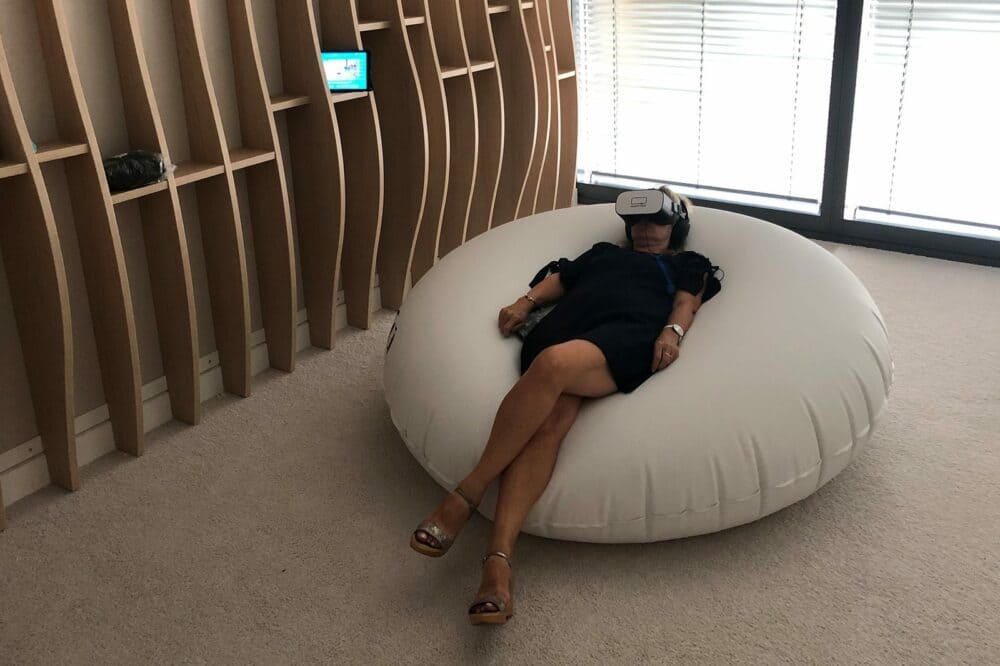 Immersions in a virtual environment are becoming increasingly popular. Various sectors such as education, medicine or architecture are adopting these new technologies for educational, therapeutic or recreational purposes. In view of this craze, it appears fundamental to wonder about the consequences of VR, particularly during prolonged exposure to 3D glasses. Are there really any side effects of virtual reality and should we be wary of them? We provide some clarification in this article.

The consequence of immersion: a jostling of the senses

When immersed in a virtual world, our organism is constantly looking for reference points and adapting. To achieve this cognitive feat, our brain makes a considerable effort. However, this gymnastics can disturb our senses, which sometimes fail to dissociate reality from immersion.

In June 2021, the French National Agency for Food, Environmental and Occupational Health Safety (Anses) produced a collective expert report on virtual reality and its consequences. This assessment acknowledged several side effects, including sensory incongruence. These phenomena occur when the sensory signals received differ from one another, for example when the eyes perceive information that the body is unable to feel. This discrepancy can result in difficulties in orienting oneself in space once back in the real world.

In addition, some disorders or phobias don’t disappear after donning 3D glasses. Indeed, if a user has a fear of heights, easily experiences dizziness or anxiety in confined spaces, then he or she may experience the same sensations in an immersion. Cyberkinetosis is similar to the sensation experienced by people suffering from motion sickness. It results in uncomfortable symptoms such as

This phenomenon remains one of the main side effects of virtual reality since it affects 30 to 50% of users according to a survey commissioned by the Anses. This proportion varies according to the medium of interaction in the immersion and age. Nevertheless, the symptoms generally appear within five minutes and disappear quickly after the session.

Some content has been shown to increase cyberkinetosis, such as roller coaster-type courses. The field of vision also plays a role: the wider it is, the more severe the symptoms.

Vision disorders: a consequence of prolonged use of VR

To produce immersion in a fictitious environment, the virtual reality software creates the illusion of a landscape at a distance. However, the proximity of the screen remains unquestionable. The relationship between these two distinct and contradictory values can lead to a conflict with the accommodation-convergence reflex. What exactly are we talking about?

Accommodation is the focusing of the gaze and convergence is when the eyes focus on a nearby object. As a result, the brain experiences confusion when confronted with divergent information: an environment that is distant, but very close to the eyes. This conflict sometimes leads to headaches, as well as eye pain with prolonged use.

On the other hand, concentration on a specific task leads to a reduction in the frequency of eye blinks by half. Blinking is necessary for eye lubrication and visual comfort. As a result, prolonged use of a virtual reality headset is likely to lead to dry eye symptoms such as burning, redness or stinging. To reduce these discomforts, it’s essential to take regular breaks. Screen light: a possible disruption of the circadian cycle

Users of a virtual reality device are exposed to screen radiation and more particularly to the famous blue light. Since this source is located close to the eyes during immersion, the question of its effect arises.

In a 2019 expert report on the effects of light-emitting diodes (LEDs) on human health and the environment (fauna and flora), the Anses drew two conclusions. The first indicated that the correlation between exposure to blue-rich light and short-term retinal toxicity was proven, as was its contribution to the development of AMD (age-related macular degeneration). The second concerns the disruptive effects on the circadian rhythm, the internal biological clock that regulates certain physiological processes such as eating and sleeping. For this reason, exposure to blue light before bedtime is likely to interfere with falling asleep.

The phototoxicity of blue light depends primarily on the amount received by the retina, called luminance, but also on the timing of this exposure. In the case of a virtual reality headset, the luminance remains low. As a result, the risk develops especially with long-term exposure.

One in 4,000 people react to light flashes with an epileptic seizure. However, there is no way of knowing whether you are predisposed to this before you have your first seizure. The probability increases with the time spent in the immersions without taking a break.

The Anses carried out a measurement campaign to evaluate the modulation of light emitted by virtual reality headsets. Most of the devices show fluctuations in luminance in a frequency range of 79 to 90 Hz. This high modulation rate can cause headaches, migraines, visual fatigue, but can also trigger a seizure in people with epilepsy in the frequency range of 1 to 80 Hz.

In addition to this contraindication, other sensitive persons have been identified by the Anses expert report, such as pregnant women, those with balance problems, and those subject to motion sickness or migraines. How do Healthy Mind headsets limit the side effects of virtual reality?

The symptoms experienced when using virtual reality vary depending on the length of exposure, the device and the content offered. The Healthy Mind software was designed for therapeutic purposes to relieve patients’ ailments and not to create new ones. As a result, the scenarisation of the environments keeps this relaxing dimension and avoids disturbing parameters as much as possible.

To limit the side effects of virtual reality and to offer a truly soothing experience, we work with a team of anaesthetists and hypnotherapists. Every step of the design is validated to avoid problematic aspects. All elements that could create a feeling of discomfort are thus removed, leaving only a calm atmosphere, conducive to relaxation.

The sessions can be modulated from 5 to 80 minutes, which means that the duration of use can be controlled, so that only the benefits of VR can be enjoyed. To prevent the onset of cyberkinetosis, the immersions are based on the format of teleportation and not displacement. This is because moving virtually creates a mismatch with the inner ear and encourages the onset of unpleasant symptoms. By staying still, the risk of virtual motion sickness is considerably reduced.

There is currently a lack of scientific data on the potential disorders induced by virtual reality. Nevertheless, the first conclusions agree that moderate use with regular breaks and at a distance from bedtime is advisable. It remains preferable to avoid immersions for people identified as sensitive to the device. In order to create a lasting therapeutic experience and to bring about relief from ailments, Healthy Mind software has been designed not to reveal unpleasant symptoms, but rather to promote deep relaxation. We would be delighted to explain further how it works or to show you the full benefits of our environments in a demonstration.